Apr 27, 2007 | 4 minutes | Debugging
The stack trace can be a very useful tool when it comes to debugging. Learn the ins and outs of how the stack trace works in this episode. Note: I am using an older version of the Rails bundle here so it might be a little different than yours. The command in the newer version is called Install Plugin and requires you to type textmate_footnotes in the search.
Click to Play Video ▶
Tweet

When you’re developing a Rails application you’ll often see an error page that looks like this. 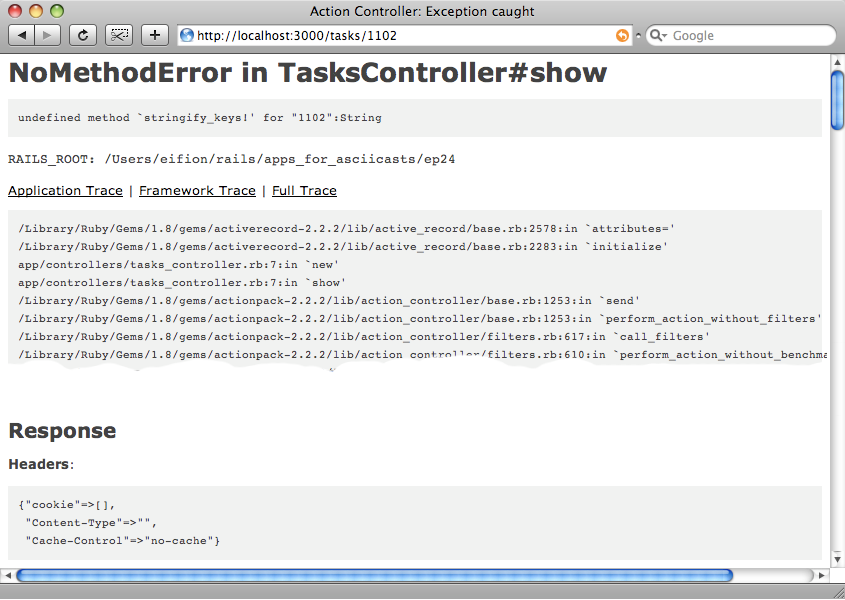 As well as the actual error message, the error page shows a stack trace. The stack trace can look a little intimidating at first, but it can provide vital information about what’s causing your app to fall over. (Note that the page above has had a lot the lines removed from its stack trace.) We’ll look through our stack trace to debug our application shortly. First, we’ll explain exactly what a stack trace is.

What is a stack trace?

To show a stack trace we’ll open irb, Ruby’s interactive console. A stack trace is shown when an error is raised, so we’ll raise one.

The stack trace here is short, just one line. Now we’ll raise an error in a method.

bar calls foo which raises the error and you can see each method in the stack trace. The stack trace in a Rails error page works in the same way. We’ll take a look at our stack trace now and try to fix our code.

The first lines of our stack trace are below

The first couple of lines aren’t much use to us as they show where the error occurred in the Rails framework. Our error is unlikely to be in there, though. The next two lines show the error happening in our task controller, in the new method which is called by show. We’ll take a look at our task controller code and see if we can find it.

Our TaskController method, including the error in the show method.

The error is in our show method. We should have typed Task.find instead of Task.new. We’ll make the change and reload our page.

It works! Following the stack trace has helped us fix our bug. There’s one last trick we can use to help us debug our apps. A plugin called Rails Footnotes will turn the lines from the stack trace into clickable links that will open the appropriate file in TextMate. To install it, run the following line from your app’s directory (you’ll need to have git installed on your machine).

Now, you can just click a line in the stack trace and immediately see the file in TextMate which makes finding your bugs even easier.