Apr 09, 2007 | 3 minutes | Active Record, Forms
Keep your controllers clean and forms flexible by adding virtual attributes to your model. This very powerful technique allows you to create form fields which may not directly relate to the database.
Click to Play Video ▶
Tweet

Below is a user registration form that accepts a first name, a last name and a password. 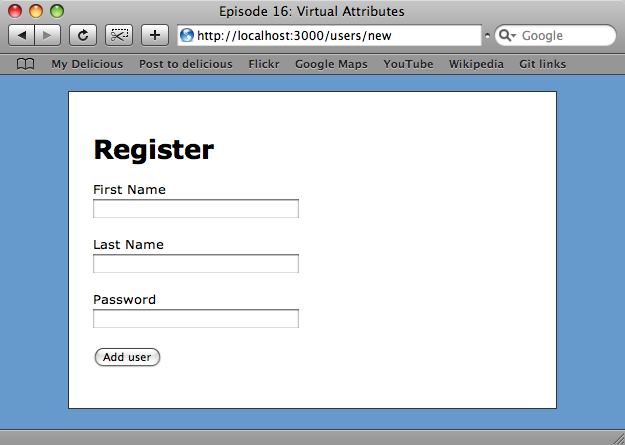 These fields are also in our database structure:

But what if we want to change the user interface so that we have a full_name field instead of fields for first_name and last_name? We can do this by using a virtual attribute. First, we’ll change our view code and combine the two name fields.

new.html.erb with the full_name field in place.

Now, when we submit the form it will look for a full_name attribute in the User model, which it currently doesn’t have. We can create this by defining a virtual attribute for full_name.

The getter and setter methods defined in the User model.

Using virtual properties means that the user interface doesn’t have to have a field to map to each field in the corresponding database table. This is especially useful when you’re using Rails to connect to a legacy database and can’t alter the fields in its tables.

Seeing it in action

We'll try out our new form and see if it works. We’ll enter “John Smith” as the full name and “secret” as the password.

Part of the development log showing the new user being added to the database.

We can see from the development log above that the full name was sent to the create action (and then on to the User model), but that the separate first and last names were passed to the INSERT statement passed to the database.