In the previous episode we introduced Formtastic, a great gem for producing form views with very little code. With it we created a basic application for a vet’s surgery that had forms for adding and editing animals and categories of animals. In this episode we’ll make use of some of Formtastic’s more advanced features to extend our application. 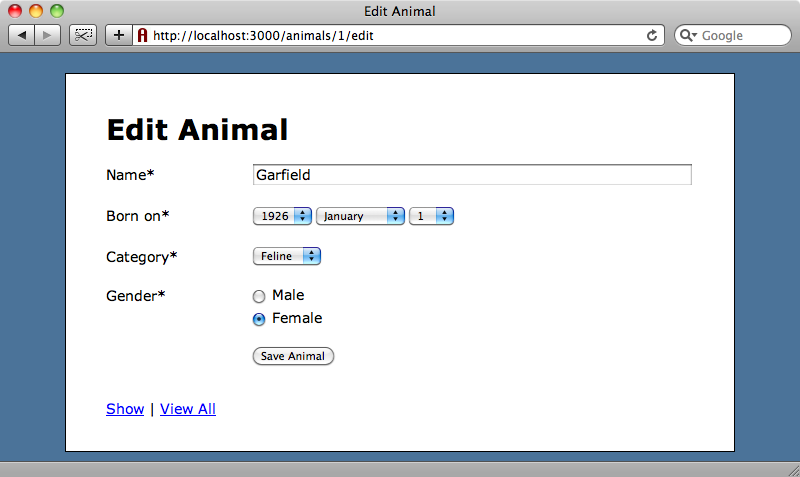 By the end of the last episode we had a form that we could use to create and update animals’ details. In this episode we’ll be modifying the form to give it some more features.

As we’re creating a many-to-many relationship we’ll create a need a join model. We’ll create one called Symptom that will reference both Animal and Problem.

There’s no need to manipulate symptoms directly from the web interface so we can use the --skip-controller option here to avoid creating the controller code.

To complete this step we’ll migrate our database to create the new tables.

Next we’ll have to set up the associations between the Problem, Symptom and Animal models. A Problem has many Symptoms and Animals:

A Symptom belongs to a Problem and an Animal:

Finally an Animal has many Symptoms and Problems:

There’s one other change we’ve had to make to our Animal model. As we’re using attr_accessible to control which fields can be updated by mass assignment we need to add problem_ids to the list of accessible fields so that we can assign multiple problems to an animal by mass assignment and therefore allow updates via the user interface.

Now that we’ve modified our models we can update the form so that problems can be assigned to animals. We just need to add <%= f.input :problems %> to the animal form to show the problems as a multiple select.

If we reload the page now and we’ll see the list of problems on the form. (We’ve already added a few problems to the database so that there’s something to show.) If we select a couple of problems and save our animal we’ll see that they’re selected when we go back to edit the animal again. 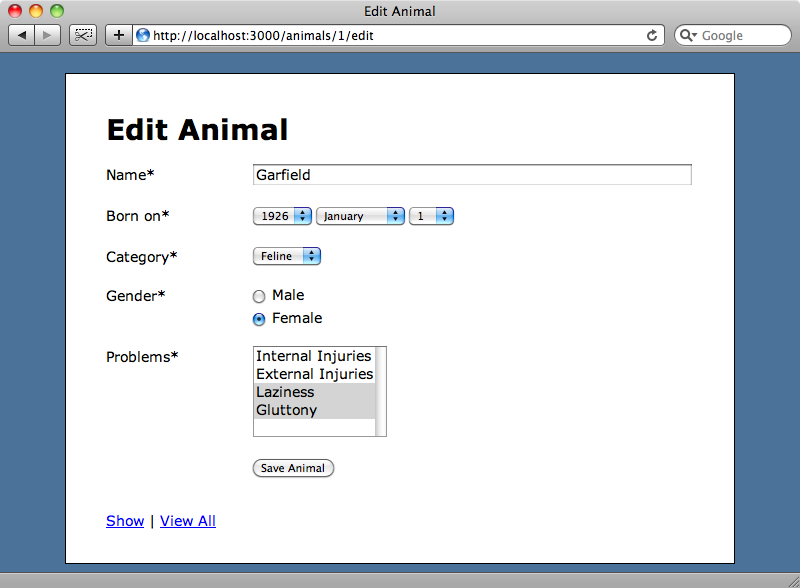 We’d like to show the problems as a list of checkboxes instead of as a multiple select control. Last time we used Formtastic’s :as option to change checkboxes to radio buttons and we can do the same here to show the list as checkboxes.

Another refresh and the problems are shown as checkboxes, with the items we previously selected from the multiple select checked. 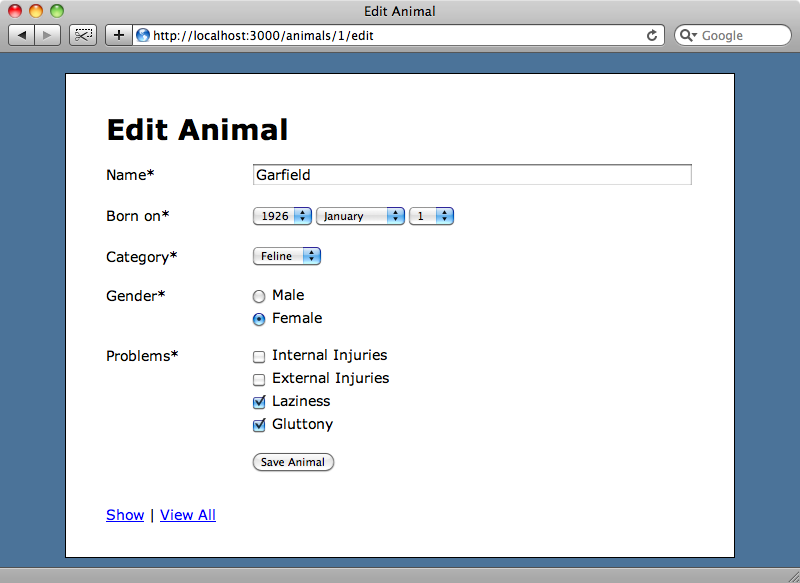 Each field’s label above has an asterisk next to it to indicate that the field is required. Formtastic makes each field required by default. We can override this for a single field by using the :required option.

Controlling this on a field-by-field basis can quickly become a hassle; it would be much easier if we could use the models’ validations to control which fields are required. Formtastic does support this, but we first need to install a plugin called validation_reflection to make use of it.

We can install the plugin into our application from GitHub.

Once validation_reflection is installed we need to restart our server so that the plugin is picked up. If we then reload the page we’ll see that the asterisks have gone. This is because none of the fields in the Animal model have validations against them. 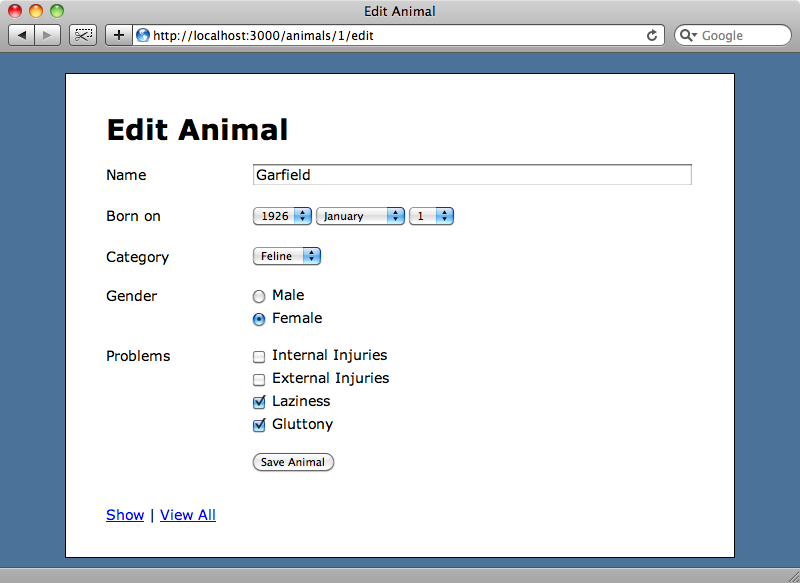 …and if we reload the form again the asterisks will have returned against those fields’ labels. 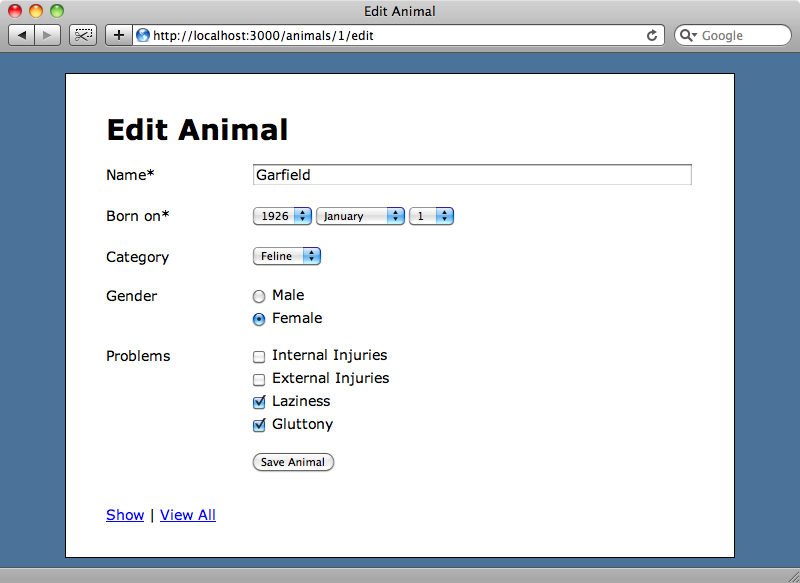 Formtastic renders a form’s error messages inline next to each field. If we remove our animal’s name then try to update it the default error message will be shown.

This is a sensible default, but the behaviour can be changed if necessary by altering Formtastic’s configuration.

If we try to submit an invalid form now we’ll be taken back to the form page but no errors will be shown. If we want to display the errors as a list at the top of the form we can use the error_messages method to show the errors in the “classic” Rails way.

The form errors are now shown at the top of the form.

There’s one Formtastic field option that we’ve yet to show: :hint. As its name suggests, :hint shows a hint message next to the field. To add a hint to the name field we just need to add an appropriate hint message.

When we reload the page now the hint message will be shown below the form field.

If we want to style the hint message or any other part of the form we can do so by modifying the formtastic_changes.css file that Formtastic generated in the last episode when we ran

The file is pre-populated with a comments section which, handily for us, includes an example of how to alter the styling of the hint text. If we want the hint text to be 11px in size and italicized then we can do so by using the following CSS:

Reload the form again and the hint text will have changed.

If we want to make further changes to the form’s appearance it’s best to look at the formtastic.css file to see how the default styles are defined. We can then use similar selectors in formtastic_changes.css to override the defaults.

That’s about it for this episode. Hopefully it has given you enough information about Formtastic to persuade you to try it out in your own applications. There are a number of features that we’ve not managed to cover over the course of these two episodes. The Formtastic documentation covers all of its features and is worth referring to for further information, including internationalization support.