Dec 08, 2012 | 10 minutes | Plugins
Allow users to import records into the database by uploading a CSV or Excel document. Here I show how to use Roo to parse these files and present a solution for validations.
Click to Play Video ▶
Tweet

In episode 362 we showed how to export database records to a CSV or Excel file. Since then there have been a number of requests for an episode showing how to import records from these types of files so that’s what we’ll cover in this episode. 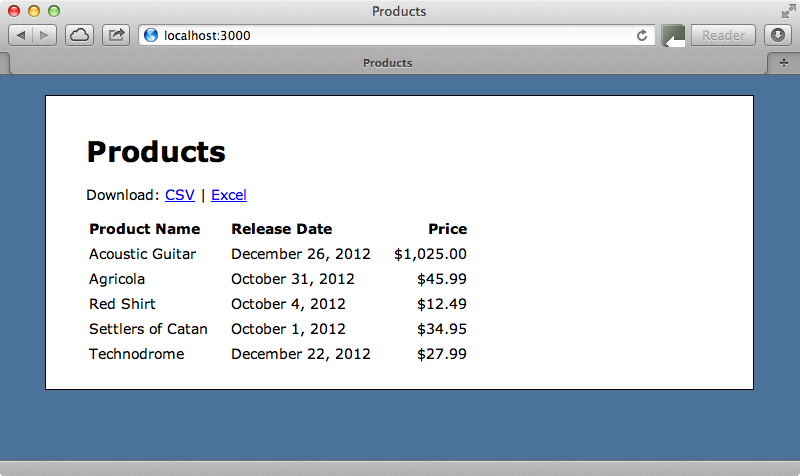 We’ll do this by adding a form to the bottom of this page that will allow the user to upload a file containing records. When the form is submitted the file will be parsed and the records added to the database. We’ll add the form at the bottom of the view template

We don’t have an object to handle the importing right now so we’ve used form_tag instead of form_for. The form will be submitted to a new import action on the ProductsController and note that we’ve set the multipart option so that the form can handle file uploads. We’ll need to set up the new path in the routes file so we’ll do that now.

Now we can focus on the model and the import behaviour. We already have some code in this class from the for exporting CSV data so we’ll focus on importing CSV data before we try handling Excel files. Our app’s config file already has the line require 'csv' so that we can use Ruby’s built-in CSV library.

The import method is shown above. In it we call CSV.foreach and pass it the path to the file. This will yield to the block for each line of data that’s found. We’ve used the headers option so the first line of data will be expected to hold each column’s name which will be used to name the data. We then create a product by passing row.to_hash. As long as the column names map to attributes in Product a new record will be created for each row. We’ll try this with a simple CSV file.

When we upload this file through our new form and submit it the new products appear in the list. 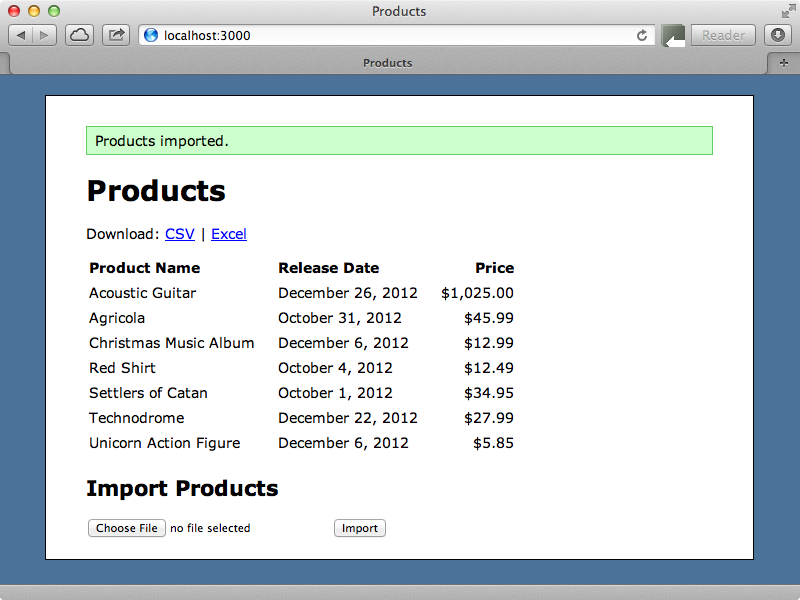 It would be useful if we had an id column in our data that could be used to update an existing record instead of adding a new one. This way we could download an CSV file, modify the products in it then upload it to change multiple products at once. If we download our existing products we’ll end up with this CSV data.

To get this to work we’ll need to change the way that the products are imported. Instead of creating a product for each row of data we’ll try to find one based on the value in the id column. We’ll use find_by_id so that nil is returned if a matching record isn’t found and in this case we’ll create a new record. Next we’ll set the product’s attributes based on the data in the row and as this might include attributes we don’t want to set attributes for such as the id we’ll update off the only the attributes that are listed in the model’s attr_accessible list.

We’ve edited our CSV file now and altered a couple of the products’ names. If we upload this file we should see these changes but no new products added. 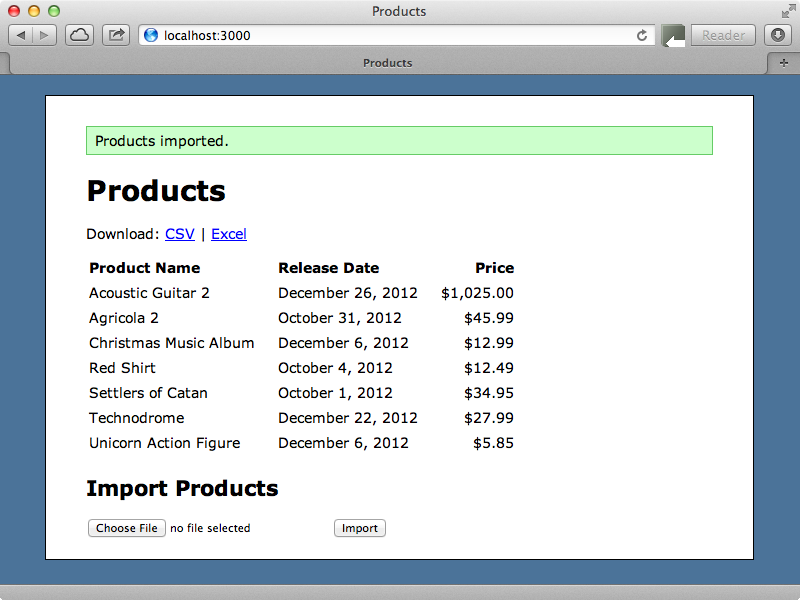 This has worked. The two products we renamed have their new names showing and no new records have been added.

Now that we have CSV files working how can we import an Excel file? There are several gems available that handle importing from Excel; in this episode we’ll use the Roo gem as it provides a standardized interface for accessing a variety of spreadsheet formats, including Excel and CSV. The gem is installed in the usual way, by adding it to our application’s gemfile and running bundle.

It’s also necessary to modify our application’s config file to require the iconv library. Unfortunately doing this adds some warnings every time we start up our Rails application so hopefully the gem will move away from using this soon.

Now that we have Roo installed we can use it to import product records from a spreadsheet. The first thing we need to do is get a spreadsheet from Roo. Doing this can be a little complicated so we’ll do it in a separate method that we’ll call open_spreadsheet and write shortly. A Roo spreadsheet has a row method which returns an array of values from that row. The first row will contain the header details so we’ll fetch that first. We’ll then loop through the other rows and fetch each one’s data, calling last_row on our spreadsheet object to get the total number of rows.

Next we need to define open_spreadsheet method. This will build up a different Roo spreadsheet depending on the file extension. We use original_filename on the uploaded file because it’s stored in a temporary file which doesn’t have an extension. Note that the current master branch of Roo has the class names under a Roo namespace so that when a new version is released we’ll need to use, for example, Roo::Excel instead of just Excel. The third option, :ignore, tells Roo not to raise an exception if the file extension doesn’t match the type.

We have an Excel file with the correct columns and a couple of product records in xlsx format so we’ll upload it through our form and see if that works. 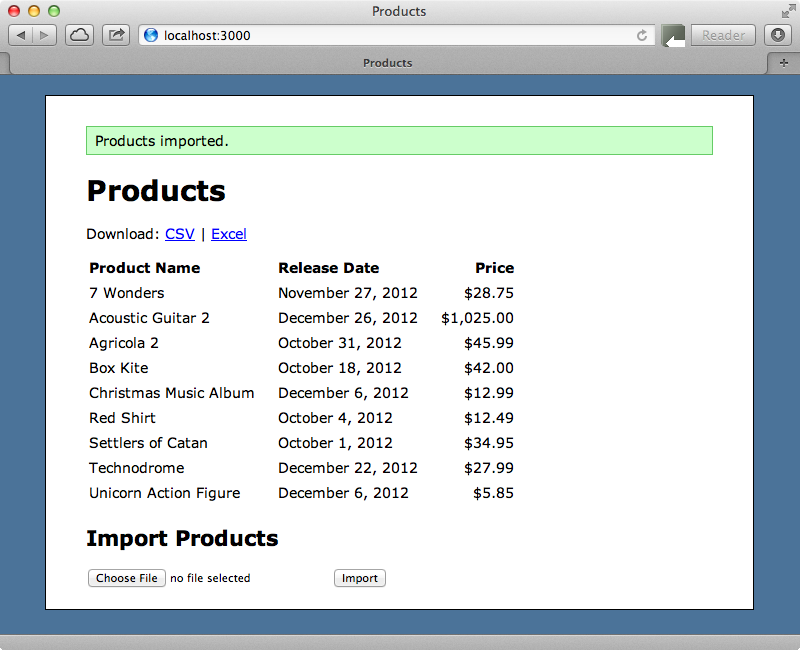 This works. The list now contains the new products from the Excel document. One issue with this solution is that it doesn’t like to import any files that we export from our application: an exception is raised when we try it. Files generated by Excel seem to import without any problems, however.

This problem aside our import script is working well, but we aren’t validating the data that we import. Let’s say that we validate the presence of the price field and that one of the records in the spreadsheet is missing that field. How do we handle this situation? It’s a little difficult to adapt our solution to handle validations so if this is important it might be better to take a different approach.

Here’s an example of what we might do. Instead of having the form displayed inline on the products listing page we can add it to a separate page where we can add instructions to tell the user which column names are required and the datatype they need to be. On this page we can validate the data and display the rows that failed validation so that we can fix these then try uploading the document again.

We don’t have time to build this solution in this episode but we’ll walk you through it to show you how it works. On the products page we now have a link for uploading a product that points to the new_product_import_path. This is handled by a new ProductImportsController and we also have a new ProductImport model to handle the importing of products. Keeping this as a separate model allows us to use inside our new templates.

We have a new template for uploading files that uses form_for so that we can easily display any validation errors just like we would with any other model. This model isn’t stored in the database, however, it’s a simple Ruby class. We use ActiveModel here to simulate ActiveRecord. When we try to save this model it will import the products and check to see that they’re all valid. If not one or more error messages will be shown. The importing itself works much the same way as the code we had before. The end result is that any validation errors that occur when we try to import the products are shown. For more information about this approach take a look at the source code for the completed app on Github.