We’ll use the Koala gem to communicate with Facebook’s API. The documentation for this gem is good and the gem is easy to use so we’ll install it then try it out to see what we can do with it. We’ll start by adding Koala to the gemfile and then running bundle.

Next in our User model we’ll make a facebook method for interacting with the Facebook API with a user’s credentials. In this method we’ll create a new Koala::Facebook::API instance, passing the user’s oauth_token attribute, which is saved when the user authenticates. We’ll cache the result of this method in an instance variable so that it’s only created once.

In the console we can now fetch any user that’s signed in to our application through Facebook and use methods on the facebook method to access the API through Koala. We’ll use it to get the current user’s profile.

To do this Koala uses Facebook’s Graph API and it helps to understand that we’ll be interacting with two different types of things. We can interact with objects, such as users, pages, events and so on or we can interact with the connections that link objects together, for example a user’s friends, likes and so on. Each type of object has its own separate documentation page which lists the types of attributes that are returned when we make a request for that object, along with the permissions that are required to access that attribute. We’ll discuss permissions later.

When we call Koala’s get_object method and pass in "me" it fetches the information for the current user through the Graph API. To get an object’s connections we can call get_connection. This takes two arguments: the object we want to get the connections for and the type of connection we want. We’ll use this to see what television shows the current user likes.

This returns an array of objects, although only one is listed here. Each object returned has an id attribute returned and we can pass this to get_object to get more information about what a given connection has.

console >> u.facebook.get_object("22934684677") # Response omitted.This provides us with a full description, a picture URL and so on. Some objects have a username attribute that we can use instead of an id and we can use this to get the same information.
console

Another good way to experiment with the Graph API is to use the Graph API Explorer. This allows us to access the public API by default, but if we paste in an OAuth token from a User record we can authorize with these credentials. We can use this go get information about objects and see the connections between them. 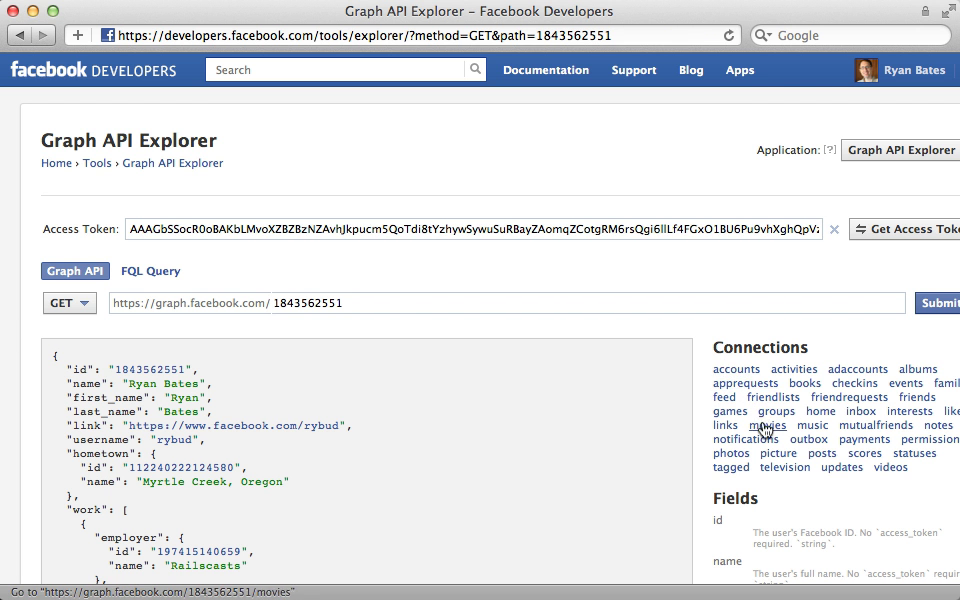 The id of any object returned is clickable and so we can easily see further details of anything we’re interested in. This is a great way to learn more about the Graph API and is well-worth bookmarking if you’ll be working with the API a lot.

If we want to do more than just fetch information about objects the Graph API section of the Koala wiki shows the methods we call call to create wall posts, delete objects, like things and more. The RDocs for Koala’s GraphAPIMethods module has documentation on each of the methods that we can call to access the Graph API. We’ll use one of these methods now to post to a user’s wall.

When we do this we get an exception telling us that we’re not authorized to perform this action. This is because the user hasn’t given our application permission to post to their wall. Each authentication token has a set of permissions assigned to it and there’s documentation on the Facebook Developers site which lists the various permissions and what they allow. One of these is publish_stream and it’s this permission that is stopping us from posting content to the user’s wall. We can determine the permissions programatically like this:

We only have the installed permission which means that this user has installed this application into their Facebook account. To gain permissions we have to request them from the user when they authenticate. To do this with the Facebook OmniAuth gem we need to modify the initializer where we set up OmniAuth and use the scope option to set a comma separated list of the permissions we want to request from the user. We’ll request the permissions for viewing their email address and posting to their stream.

As we’re also using the JavaScript SDK for authentication we’ll need to add this option there too. 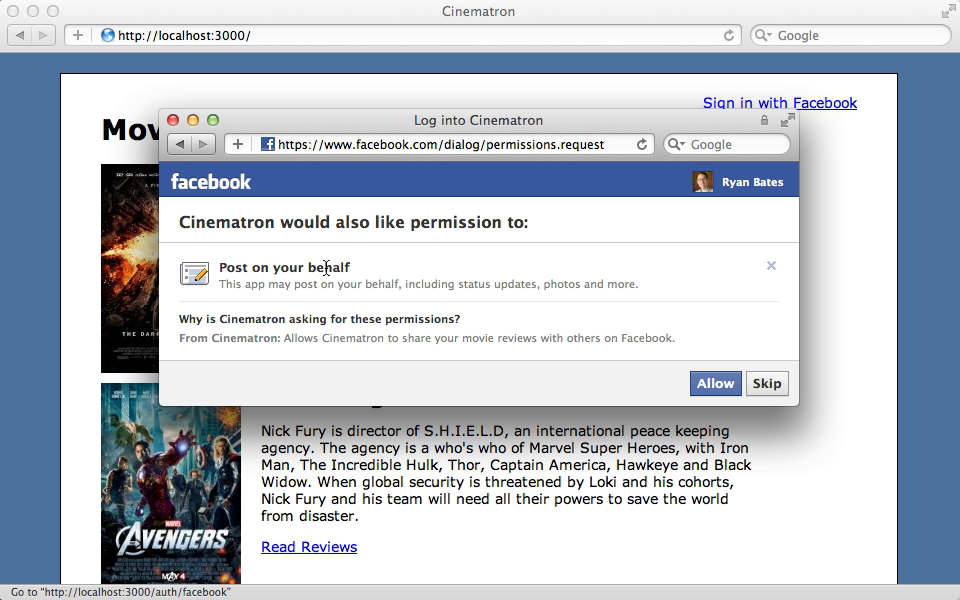 When we have an application that has the ability to post content we don’t want to test this behaviour on a real Facebook account. We can set up some test accounts by going to the Roles section of our app’s Facebook page and adding some test users and we can add as many of these as we want for our app. We’ll add three users, each of which will behave like a full Facebook account. We can manage these users, make them friends with each other, if we want to test that behaviour, and even switch to one so that our app behaves as if we were signed in as that user. We’ll do this now and give our application permission to post to this test user’s wall.

Once we’ve logged in as this user we can test this functionality out in the console. If we fetch the test user we’ve just logged-in as and look their permissions we’ll see that we have much more permissions than we did when we checked our own.

We now have permissions to write to the user’s stream, upload photos and video and change the user’s status as the publish stream permission includes all these. We can test this by writing to this user’s wall.

This time we don’t get an exception so this has worked. We can check this by viewing that user’s wall. 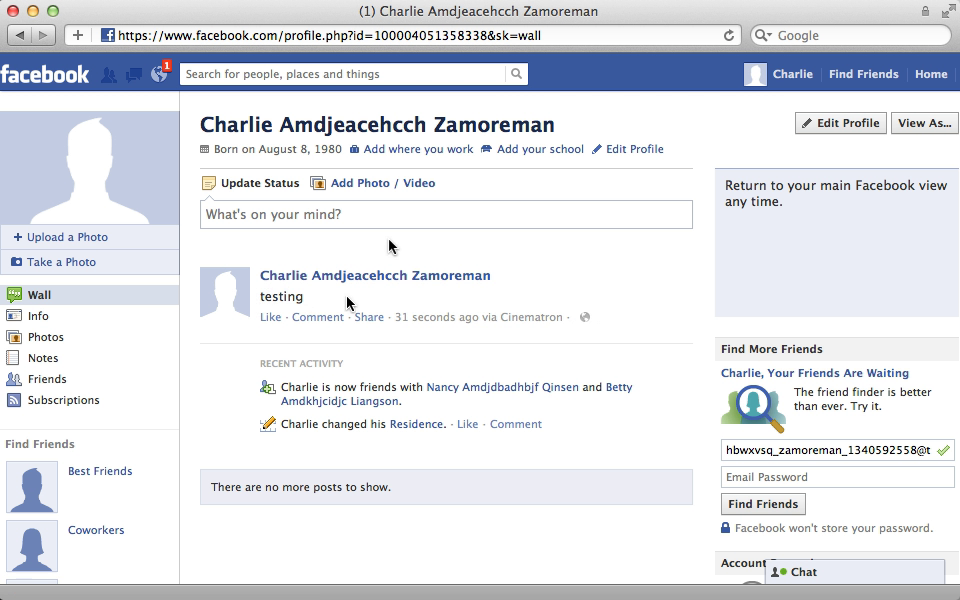 One thing we haven’t discussed yet is Facebook Query Language, FQL. This allows us to write queries that look similar to SQL and which allow us to access data in a way that’s not really possible through the Graph API. We can run FQL queries in the Graph API Explorer If we want to get, say, the pictures for the Amazon and Google accounts we can run this query:

This will return a JSON data hash contain each picture’s URL. We can also run these queries in our Rails application and we’ll demonstrate this in the console.

We’ll finish off this episode by talking about error handling. We’ve logged out of our application and from Facebook and when this happens all the access tokens that were associated with our account are invalidated. If we try to access the Facebook API now to get an object for the current user a Koala::Facebook::APIError exception will be raised telling us that the session is invalid as the user has logged out. We don’t want error like these throwing 500 errors in our application so how should we handle them?

We’ll illustrate this problem in the app rather than in the console. Let’s say that we want to display the number of friends that a user has on the page. To do this we’ll add a friends_count method to the User model.

Now in the index template we’ll display this value.

Now when a user signs in through Facebook the page should display the number of friends that user has. If a user visits Facebook and logs out then revisits our application we’ll have a problem, however. We still have a current_user in our app but, because they’ve signed out of Facebook, we’ll see the same Koala::Facebook::APIError we saw in the console. We could modify our friends_count method to handle this error, like this:

If we won’t want to just return nil here we could make a custom null object to represent the idea that the API has returned an error. This would also have the advantage of being able to access the error from this object. Even if we don’t do this at least when we reload the page now it will load correctly, even if it displays nothing where the number of friends should be.

If we find that we’re doing this kind of thing a lot in our application we could move this rescue code in to the facebook method and use a block when we call it.

This way the block will be triggered from within the facebook method and the exception will be caught. Our page still has the same functionality it had before but the code if now a little cleaner. Another thing we could do is automatically sign the user out from our application if they’re not currently signed in Facebook. We can do this with some JavaScript code, like this:

The new code is the three lines at the bottom. Here we check to see if there’s a sign out link on the page, which indicates that the current user is signed in to our app. if there is we get their Facebook login status. If they’re not logged in then we set the window’s location to the sign out page. If we try this, though, it doesn’t work and this is because our app is running in Sandbox Mode which makes it invisible to all public users so when we sign our of our app it doesn’t properly initialize with the JavaScript SDK. If we go to our app’s page on Facebook and disable sandbox mode, then go back to our application and reload the page the “Sign out” link will be triggered and we’ll be signed out.

That’s it for this episode but there’s more to the Facebook API than we’ve covered here. One thing we haven’t covered are realtime updates. There’s more information about this on the Koala gem’s README page but essentially this feature allows us to subscribe and listen to event changes and fire a callback information when an event fires.

We’ve covered a lot in this episode but there’s still more we can do to integrate Facebook into our application. For example when a user writes a review of a film it could notify other Facebook users about that review so that they can come to our application and read it. We could post to the user’s wall when they write a review but this is poor behaviour. There must be a better way to do this and there is: using the Open Graph protocol. We won’t cover this here, but it will be covered in a future episode.