Nov 28, 2011 | 11 minutes | Tools
In this second part on making a gem, you will learn how to publish a gem by releasing it to rubygems.org, testing it through Travis CI, documenting it on RubyDoc.info, and advertising it on various sites.
Click to Play Video ▶
Tweet

In episode 301 we extracted a Ruby gem from an existing Rails application. This gem, called url_formatter, hasn’t been published yet so it’s only available on our development machine. This means that if we want to use the gem in an application we have to specify the path option in the gemfile.

In this episode we’ll publish the gem so that we can share it with the world and let anyone use it in their Rails applications.

Publishing The Source on Github

We’ll host the gem’s source code on Github. When we used Bundler to create the gem’s initial files it created a git repository for us in this directory but we haven’t committed any files to it yet so our first step is to do that. We’ll add all the files and then make the initial commit.

Next we’ll need to go to Github and create a repository. (If you don’t have a Github account you’ll need to sign up first.) Once we’ve done so we’ll be taken to a page that shows the next steps we’ll need to take. As we’re adding an existing repository we just need to add the new remote and push the files up.

Our project is now up on Github and anyone can use our url_formatter gem by copying its git URL, git@github.com:eifion/url_formatter.git, and using it in the Gemfile for a Rails application like this.

When we run bundle for this application now it will pull this gem from Github instead of using the local version.

Our gem is now publicly available but hasn’t been officially released. To this we need to publish our gem to RubyGems. This is easy to do, we just have to run a couple of gem commands, but we need to do a couple of other things first.

As we’re making the first official release of our gem it’s a good idea to make a change log file where we can log the changes between each version. This is our first version so we’ll simply note that this is the initial release.

It’s important that we commit any outstanding changes before we build our gem so we’ll commit the changed version file and the change log now.

We’re ready to build our gem now. We could use gem build and gem push here but Bundler provides a Rake task that will do all of this for us.

This command will also tag our release and push it to Github and RubyGems. You might be asked for your RubyGems login details when you do this, so if you haven’t created a RubyGems account you’ll need to do so. If we visit our Github repository now we’ll see that that commit has been pushed and that we have a v0.0.1 tag listed, too.

Now when someone wants to use our gem it’s no longer necessary to use the git option as the gem has been officially published. To include the gem in a Rails app we only need to specify its name.

Now that the gem has been officially released we’ll bump up the version number to the next release version. This is sign that we’re developing the next version on the current codebase.

Next we’ll show some tools and services that we can use to improve our gem now that it’s been released. The first of these is Travis CI. This is a Continuous Integration server that will automatically run your tests in the background when you push changes up to Github. To get started with this we just need to visit the site and sign in through Github. Once we’ve signed up we can go to our profile page where we’ll see a list of our Github repositories and can choose the ones to enable for Travis CI. If we need to customize this functionality we can do so on the repository’s Github site. In the Service Hooks section we can select the Travis Hook and configure the options there. Normally, though this shouldn’t be necessary.

When Travis CI tries to run our gem’s tests it fails. We can find out why by clicking on the build number where we’ll see the output that we’d get from the console as it ran its commands. The error message we see says “rake is not part of the bundle” so we’ll need to add this to our gem’s dependencies.

Next we’ll commit the changes and push them to Github.

Travis will automatically pick up the commit to Github and will run the tests again. They fail again, though this isn’t surprising as Travis CI is using Ruby 1.8.7 while our gem is written in Ruby 1.9 and uses some of the new 1.9 syntax. We need to tell Travis to use 1.9 for testing and we do so by creating a new file in our gem’s root directory and specifying the version of Ruby to use there.

If we want to support multiple Ruby versions we can do so here, but for this gem we only need to support 1.9.2. We’ll need to add, commit and push this file for Travis to pick it up.

Travis will pick up this change and now all of the tests pass.

Travis CI provides a build status image. We’ll link to this in our project’s README so that people browsing the project on Github can see its current status.

The project’s build status will now show on Github next to the README’s title.

Next we’ll focus on the gem’s documentation. A README file often isn’t enough so we’ll share the RDocs on RubyDoc.info. Our gem doesn’t have any inbuilt documentation yet but by adding comments to the source code we can add some. We should add documentation for every public method that’s considered part of the API. Our gem only has one public method, format_url in the ModelAdditions module so we’ll add some comments to it that describe how it works.

If any of your gem’s public methods take arguments or a hash of options it’s a good idea to describe those in detail here. Note that we’re using some custom RDoc formatting in the comments; wrapping text in tt tags will turn that text into a code snippet. There’s more information on the markup syntax on the RDoc Readme page. If we use YARD, which is supported by RubyDoc.info, there are some additional options that we can pass inside the documentation and the Getting Started guide has more information on that.

Once we’ve committed and pushed the model_additions file we can add our project to RubyDoc.info. All we need to do is click the “Add Project” button on the home page, enter our repository’s public git URL, in this case git://github.com/eifion/url_formatter.git and click “Go”. After we do that we’ll be taken to our project’s new documentation page. 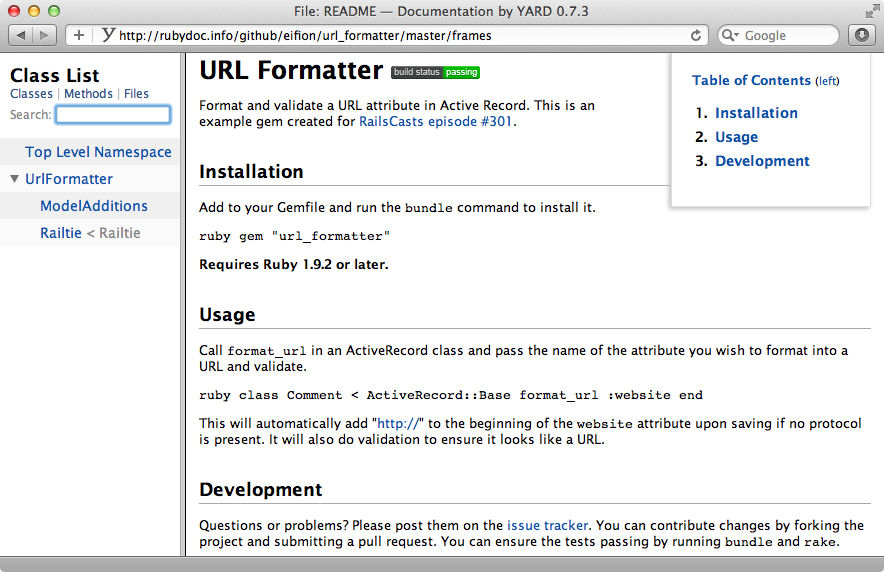 The generated documentation includes the gem’s README and if we click on the “ModelAdditions” link in the left frame we’ll see the documentation that we wrote for the format_url method.

It’s a good idea to link to this documentation from the README file so that anyone browsing the project on Github will see it. Each method listed has a permalink so that we can link to it if we need to. We should also add some documentation on our project’s Github wiki.

Relish is another service that can help with documentation. It ties in nicely with Cucumber features so if your project uses Cucumber you should consider using it.

Now that our gem is well documented and tested its time to advertise it so that other Ruby developers know about it. One good place to do this is The Ruby Toolbox which is an excellent resource for finding gems that solve a specific problem. We’ll need to sign in to this site through Github to use it and once we have we can suggest that they add our project on this page.

We can also advertise our gem on RubyFlow. We can write a blog post here that shows what our gem does and how to use it. Once we feel that our gem is production ready and rock-solid we can share it with some podcasts such as The Ruby Show and Ruby 5.